It’s New Comic Book Day, and in the midst of your excitement for the latest issues, don’t forget to check out this small press comic! As an End of the Universe reader, not only do you get to read about only the coolest and most interesting independent comics accessible via crowdfunding, but the creators have agreed to send any EotU backers a bonus sticker with our site logo– simply identify yourself as having come from this site when you back the book, and receive a FREE End of the Universe sticker!

Beth Zonkowski’s mother died when she was only six years old, the victim of a drunk driver. Although she doesn’t remember much about Frances, Beth was left with her jovial personality and a love for the singer Tom Jones. Lorne, Beth’s father, had a harder time forgetting about Frances, and after a string of failed relationships following the death, he subconsciously resigns himself to a lonely, reclusive life without the person he loves. Eighteen years after Frances’s death, Beth is still living at home, trying her best to keep her father sane and happy. This is the story of their cross-country road trip to see Tom Jones play a one-night-only show in Las Vegas and to (maybe) rekindle their strained familial ties. 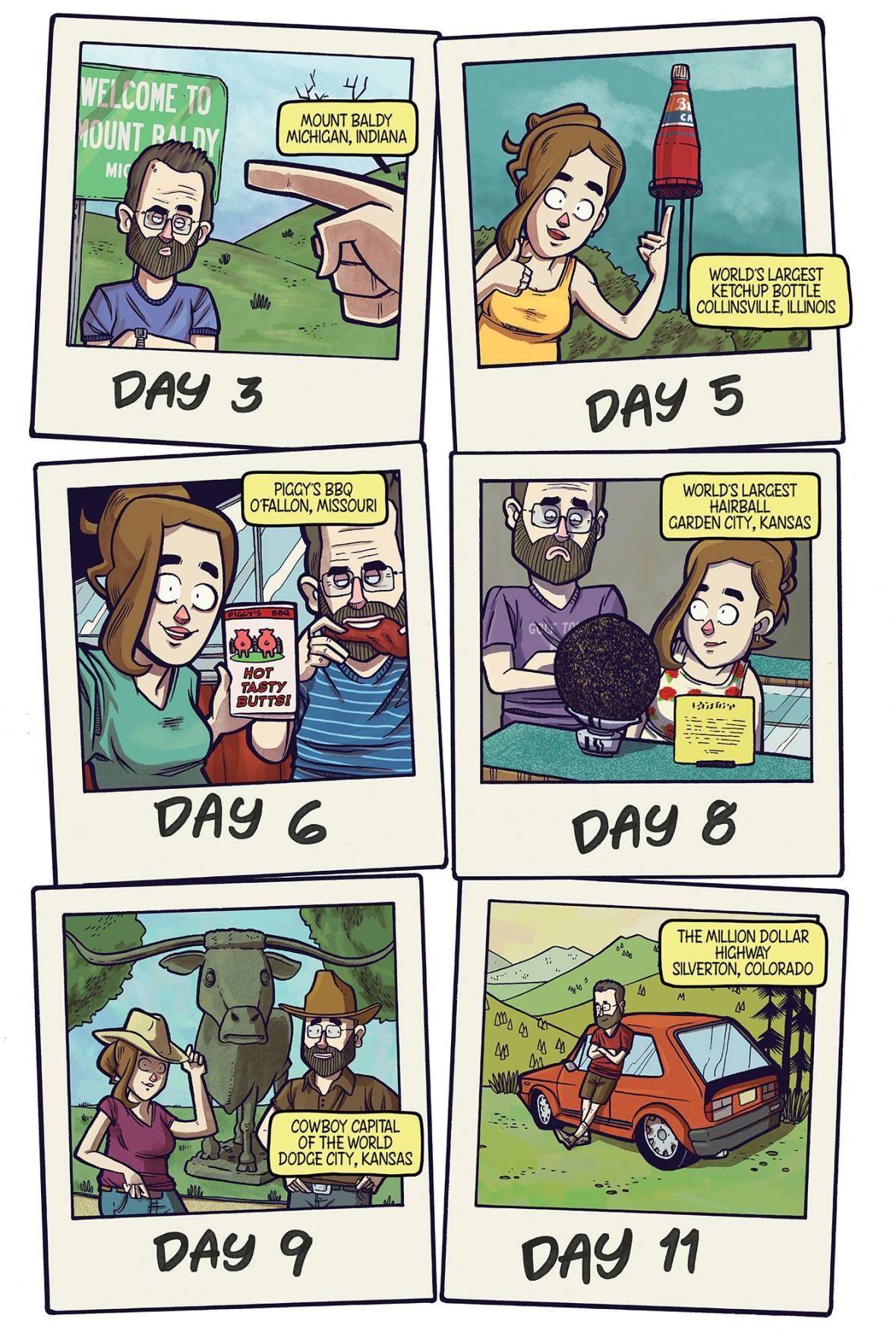 In addition to print and digital copies of the book, the creative team has come up with thematic swag in the form of bumper stickers, air fresheners, and postcards so you can feel like you, too, are road tripping to see Tom Jones. And if you’re really willing to go the extra mile (pun intended), there’s a concert t-shirt waiting for you at the top tier.

The creators of Sex Bomb Strikes Again have agreed to ship a special prize for backers identifying themselves as End of the Universe readers. Once you contribute, email ally.shwed@gmail.com, and you will receive a free End of the Universe Sticker with your reward!

Why did you choose crowdfunding for this project?

The story is a short graphic novel, so we knew it’d be difficult for relative “unknowns” like us to get it published by any major publisher.  But we feel it really has potential as a story people would enjoy, so Kickstarting it just made sense.  Not only are we getting to share the book with fans and followers, but we’ll also have copies that we can give to editors and publishers to show them what we can do.

Why should End of the Universe readers donate to your book?

The book, Sex Bomb Strikes Again, is the story of a father and daughter who take a cross-country road trip to try to rekindle their strained relationship–but also to see Tom Jones play a one-night-only show in Las Vegas.  It’s a comedic, heartwarming story that will appeal to all kinds of readers, from fans of Tom Jones (and Toto!) to anyone who’s ever had an awkward moment–or many–with a parent.

What sets your book apart from all the other comics available on and off of Kickstarter?

While the story itself is a unique one amidst the comic world, the art is even more special–there aren’t many artists out there that draw like Gerardo.  And the final result of the book will show just how important the project was to us: even if we don’t reach our Kickstarter goals, we’re still planning on finishing the story and printing it by whatever means we can to put a copy in the hands of anyone and everyone who wants it.

If this part of the plan is successful (i.e. your Kickstarter reaches its goals, you produce your content, it’s received with wide acclaim, etc.), what’s next? How long-term is this?
This book is a stand-alone story, but it’s only the first of many projects on which Gerardo and I plan on working.  If this Kickstarter is successful, then we plan to launch more of our stories, both individual and collaborative, via that medium, as it’s a great way for independent artists to gather a fanbase, raise the funds necessary to serve as their own little publishing house, and really, just to get their work out there–which at the end of the day, is our real goal.  We’ve already make our way around the con circuit (we just recently tabled at Special Edition: NYC) but after years of Xeroxing our minis, we’re excited to add some paperbacks to our offerings!
Click here to support this book!